I consider myself kind and giving and generous. Especially when it comes to my children. I would do almost anything to make them happy.

By my generosity has been put to the test. My 23-year-old son Justin has moved back home after graduating college. As he begins his career working for my husband Marty he is living with us and saving money until he can afford to move out on his own.

Suddenly I have to share things that were previously my own. I share my couch which now has a dent where he sits in the sweet spot. I share my office where he sits across from me after work talking, laughing, and playing computer games. I share the remote which now tunes right to Comedy Central if I actually get a chance to watch the big tv. I share space in my high-end German freezer drawers which are filled with his low end vodka and whiskey. And most of all I share my husband’s attention, which I previously had to myself except for his iPhone and Blackberry. Now my husband and son talk sports, politics, and work and I feel like raising my hand when I want to speak.

I was starting to get used to all the togetherness. But I may have made it too comfortable. Recently there was a show down. It was the last straw. I snapped. All I wanted was a bite of dark chocolate one night after dinner. I went into the pantry and reached into my little clear plastic bin. Expecting to find my stash of carefully curated gourmet dark chocolate bars, there were only shreds of paper wrapper and tiny shards of foil. Someone ate Mama’s chocolate stash. The cupboard was bare.

I nearly went into a rage. “Who ate my chocolate!?” I shrieked, knowing immediately it was Justin. A lot of pent up emotion rushed out of my head like an exploding water main as I ranted about my missing chocolate bars. “Those were mine! I was saving them! They were special!” I shouted. Apparently I’m not a good sharer. My husband looked at me like I was out of my mind. “It’s just chocolate”, he said. “What’s the big deal?”

Just chocolate!? He obviously is not a connoisseur of fine chocolate. I was building a cultivated collection of high cocoa percentage dark chocolate. A week earlier I had warned Justin to keep his mitts off my chocolate when I noticed that the Max Brenner chocolate and almond bar was all but gone. He left two squares of that delectable bar which he had given to me for my birthday! As I ate the remains I gave him a warning that my special stash was not for public consumption. I bought him some cheap milk chocolate and put those in the bin. Then two days later, my favorite bar was gone — an eight dollar Knipchildt dark chocolate bar with squares oozing burnt caramel and Hawaiian sea salt. I didn’t even think he liked dark chocolate. I heeded a second warning not to touch my stash. I know I appeared selfish and immature – but I went through his terrible twos and now it was MY turn to be that way. So I did what my own mother used to do – I hid them. Like most men he usually only sees what is right in front of him. I carefully concealed the beautifully wrapped Weiss dark chocolate bars, purchased in the Paris airport on a recent trip. I tucked away the slim Mast Brothers dark chocolate bar with slivers of almonds and the crunch of cocoa nibs that I bought in their sweet smelling hipster shop in Williamsburg.

So when I walked into the pantry that day and found all my chocolate gone I felt very angry. And frustrated. And ridiculous. My reaction was certainly out of proportion to the infraction. He never acted that way when he caught me eating his depleting cache of Halloween candy from his plastic pumpkin years ago. After I calmed down I called a few friends to tell them what happened and see if they understood my intense reaction.

I phoned Lori – she’s rational. She is patient. She has kids the same age. I thought she’d tell me I had overreacted. But she didn’t. She got it! She said she has the same feeling when her family leaves her with no milk for her morning coffee. She spews venom. This is a woman who is happy to cook and serve and feed large groups of friends and family on a moment’s notice. But that’s her breaking point. If you are a guest in her house – hands off the last drop of milk!

Bolstered by the support I emailed my friend Hilary – she also has two sons and loves chocolate. She understood completely. She answered that she goes crazy when she wants some ice cream, takes out the container and finds just a spoonful. Or worse – that it’s empty. Her voice gets shrill, the fridge door slams and she goes hunting for the perpetrator.

We are mothers – we love to nurture, feed, comfort our children. But sometimes we want a place of our own, time to ourselves, or just a nice bar of chocolate saved for the perfect moment to enjoy it.

So I know just what I’m getting Justin for HIS next birthday — a nice collection of special chocolate bars all his own. And I can’t wait to eat them, one delicious bite at a time. 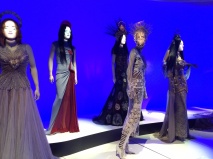 Musings from a Food Shopper Extraordinaire

The Mind of Leonard